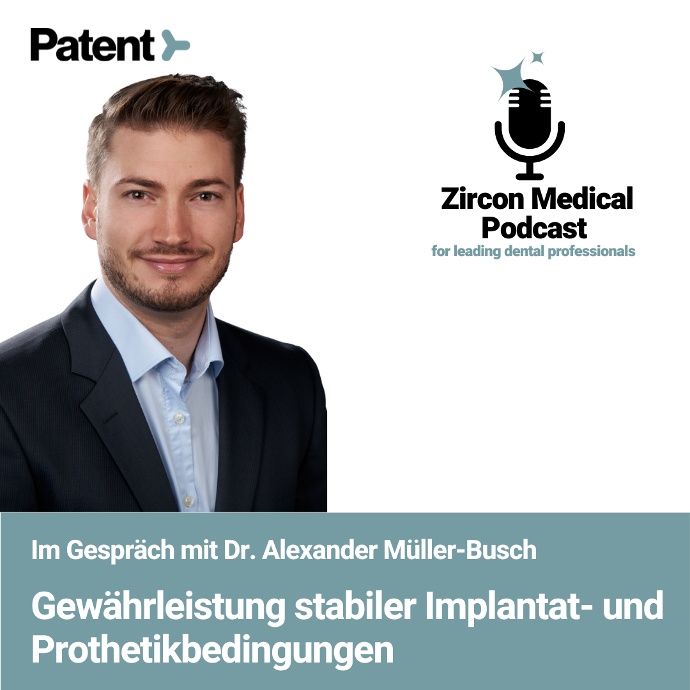 In Conversation with Dr. Alexander Müller-Busch

Dental implants are ideally supposed to last a lifetime. It’s not enough for them to display strong osseointegration; they must remain stable and survive for the patient’s lifetime. In recent decades, the barrier to the success of dental implants has gone beyond osseointegration to soft tissue stability. After all, the bone stands hard, but the soft tissue is the guard.

Our team at Zircon Medical recently hosted Dr. Müller-Busch, a specialist in periodontology and implantology from Germany, on our podcast to share his insight and discuss how to ensure optimal and stable implant and prosthetic conditions.

Introducing Dr. Müller-Busch, the leading dentist at a dental practice in Ingolstadt, Germany

Dr. Alexander Müller-Busch is the leading dentist at his practice “Dr. Müller-Busch & Kollegen” in Ingolstadt, Germany. The practice was founded by his father and in 2013 he joined the parental practice. He is specialized in periodontology and implantology and is an experienced speaker at continuing education events.

Dr. Müller-Busch says he was drawn to dentistry when he was young because it offered him the ideal combination of helping people, practical aspects and financial security. Originally, there were two possible professions for him: policeman or dentist. But he veered towards dentistry because he had excellent grades in his school-leaving examinations, and he saw good conditions to successfully complete his studies. According to him, the realities of dentistry don’t match his expectations at 16 or 17, but the reality is even better.

Experiences at an aid mission in Nepal

Dr. Müller-Busch recently attended an aid mission at Kantipur English School in Kathmandu, Nepal. As a part of his mission, he treated hundreds of students between the ages of 3 and 16. When asked about his experience in Nepal, Dr. Müller-Busch says it was transformative.

The aid mission was organized by Dental Volunteers, a non-profit association founded by a dentist from the Tegernsee area who coordinates aid missions worldwide. Dr. Müller-Busch says the aids mission was fairly spontaneous, although the wish for an aid mission in Nepal had existed for some time. He was accompanied by his wife and mother-in-law, who was instrumental in organizing the event.

Dr. Müller-Busch spent one and a half weeks in this Kantipur School treating children from 3 up to 16 years of age. They mostly performed conservative treatments, such as dental screening, fillings, endodontic treatments, and extraction of milk teeth. Additionally, he also focused on prevention, education, handing out toothbrushes, and simply showing children how to brush their teeth properly. His original plan was to get all children of the entire school treated, and they also managed to do it.

Dr. Müller-Busch also commented on the lack of basic awareness about oral health, contrasted with the fact that children could buy chocolate and sweets on almost every street corner. In combination with poor standards of oral hygiene, the easy availability of sweets led to terrible conditions for the long-term oral conditions of the children. While he certainly did everything he could, he was struck by how much more work needs to be done in the area.

Bone stands hard, but the soft tissue is the guard

“If you change your location every five years, you have almost no failures, because most prosthetic restorations actually last five years anyway.” Dr. Müller-Busch mentioned that quote as a prelude when asked about the scientific criteria for the long-term success of dental implants. He expounded on the fact that the true success of treatment should be measured beyond its immediate results. He says he was glad to have worked at his father’s dental practice initially because that gave him the skills and expertise he needed without significant missteps.

Dr. Müller-Busch says patient education is an essential component for the success of implants and prosthetic restorations. It’s important to listen to the patient and determine what you can achieve and what the patient wants, and to communicate the need for the different treatment options that may not seem necessary to the patient.

The dentist must also ensure some oral parameters for successful implants, such as stable hard and soft tissues. The patient must have sufficient bone supply - both vertically and horizontally. There must also be keratinised or attached tissue and sufficient tissue thickness.

The design of the prosthetics also contributes to the success of the implants. The patient should be capable of cleaning the prosthetics themselves, whether fixed or removable. Dr. Müller-Busch also cites a quote from a systematic review by Prof. Dr. Stefan Fickl— bone stands hard, but the soft tissue is the guard. This quote highlights that the soft tissue seal is a basic prerequisite for the long-term success of implants because the soft tissue prevent the infiltration of bacteria, thus minimizing the risk of peri-implant complications.

After all, as Dr. Sofia Karapataki said in one of our previous podcast episodes, there’s no such thing as the ideal dental implant patient.

Prevention: a core component of implantology

Dr.Müller-Busch says that prevention is an essential part of his implant treatments. Often, osseointegration determines the survival rate of dental implants, he says. However, if a patient has a gingival recession of 5 to 10 millimeters,the treatment cannot be considered as "sucess". Dr. Müller-Busch's treatment is therefore all about prevention and ensuring that bacteria do not enter the gap between the soft tissue and the implant surface, which is only possible with adequately adjacent soft tissue.

Visibility of implants due to gum recession

Dr. Müller-Busch recently published a paper in the Dental Implantology & Periodontology, which discussed the case of a 26-year-old patient who had an extremely unfavourable aesthetic outcome due to poorly placed implants. The recession of the bone and subsequently of the soft tissue, had led to the underlying titanium implants becoming visible, which is why an implant extraction had to be carried out later. Dr. Müller-Busch discusses the details of that case to highlight the importance of ensuring optimal conditions for implant placement to minimize the risk of gum recession.

The patient had previously received two implants in the regions 21 and 22, and the surrounding 11 and 23 were healthy. The titanium surface of the implant was visible from the front when the patient smiled. As part of the patient's treatment, the practitioners removed the visible implants and rebuilt the underlying hard and soft tissue. They use soft tissue grafts to enhance the soft tissue volume and allow the region to heal. Finally, they used a temporary bridge to replace the missing teeth.

The patient was satisfied with the Maryland bridge for a while, but she eventually decided she wanted another implantology treatment. Before performing another implant surgery, the dentist and dental technician collectively investigated the root cause of the first failed surgery. They realized that the previous procedure likely led to an unfavorable outcome because of too little space for two implants. Instead of placing two implants, he placed one implant with a conventional bridge, thus replacing both missing teeth with only one implant.

Ensuring the long-term stability of implants

Dr. Müller-Busch says he focuses on the longevity of the treatment to be carried out in every plan. After a tooth has been extracted, he provides good exposure of the alveolus and ensures that there is sufficient adequate bone prior to implant surgery. The goal of the soft tissues is to protect the underlying bone structure, so he ensures his patients have thick and healthy soft tissues. He also ensures the final restoration can be cleaned easily by the patient.

Dr. Müller-Busch takes an X-ray one year post-implantation, which serves as a baseline X-ray and for later comparison. He does not take x-rays every year, but only if there are signs of complications. Otherwise, as in periodontics, he performs regular probing to determine the health of the implant. Even if everything looks good externally, he performs regular probes to make sure there are no peri-implant diseases.

Dr. Müller-Busch says the role of dental technicians is too underestimated. Dental technicians must be consulted and allowed to speak their minds freely for optimal long-term implant success. The success of the implant also depends on how the prosthetics are made. In Dr. Müller-Busch's practice, close cooperation with the dental laboratory is very important. Furthermore, dentists today should use all the possibilities of digital technologies to integrate dental technicians more strongly into the team.

You can learn more about Dr. Müller-Busch and his practice from the official website. You can also contact him on Instagram or LinkedIn or sign up for his workshop at https://www.dr-mueller-busch.de/veranstaltungen-fortbildungen.html.You can listen to the entire conversation on the latest episode of the Zircon Medical Podcast. 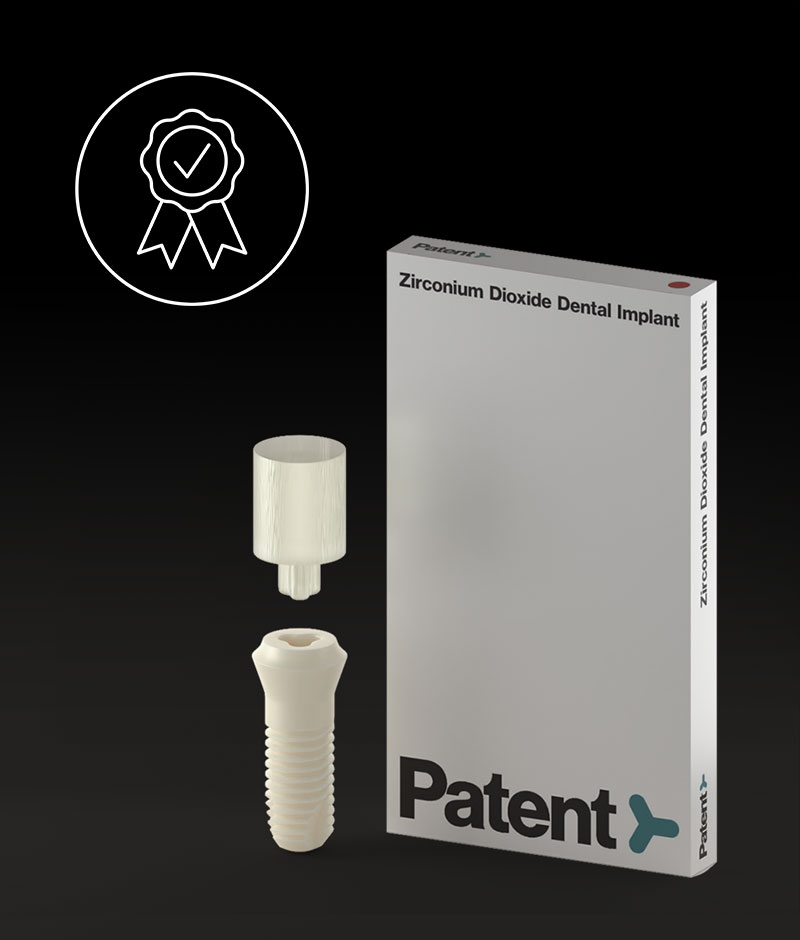