The oldest European professional society for dental implantology - the DGZI - turned 50 last year. Due to the Corona pandemic, the anniversary congress could not take place. On October 1 and 2, 2021, the congress will be made up for in Cologne.

Originally, the anniversary of the DGZI was to be celebrated last year at the founding location in Bremen. But due to pandemic-related restrictions, the congress, like so many others, had to be canceled and will now take place on October 1 and 2, 2021, at the Maritim Hotel in Cologne. The special highlight is that, in keeping with the occasion, it has been possible to attract not only a high-caliber but also a special team of speakers.  Presidents, past-presidents, chairmen and board members of DGI, DGOI, BDO, DGET and DGZI will give the scientific lectures in the main program under the theme Visions in Implantology: 50 Years - From single Implant to digital Workflow.

The DGZI also proves that it is an "oldie" on the cutting edge with a highly modern congress concept. Top-class lectures, the transmission of a live operation into the conference hall, a live tutorial, an extensive range of table clinics, a digital poster presentation and a coordinated exhibition concept are integral parts of the congress.

Participants will experience a congress in Cologne that looks back on 50 years of implantology, raises new questions and presents visions in the interaction of participants, speakers and the industry. With this modern, organizational and content-related claim, the organizers have, on the one hand, eliminated the previously customary fragmentation of the congress into various panels, workshops and side programs, and, on the other hand, also sharpened the profile as an event for the practitioner. All lectures, the panel discussions, the broadcasts of the live surgery/live tutorial as well as the table clinics will take place on both days completely in the main podium, which is also the exhibition area.

Parallel to the Future Congress of the DGZI, using the same infrastructure with a joint industry exhibition as well as joint table clinics, the MUNDHYGIENETAG will take place in Cologne.

Note: The event will be held in accordance with the applicable hygiene guidelines! 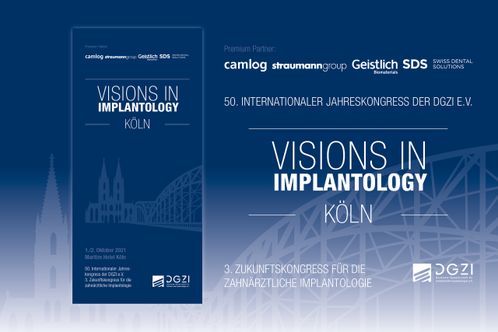